Some years ago I took a trip to France with two girlfriends and my son who had just graduated from college. The goal of the trip was to go to the Cannes Film Festival even though none of us are actors, filmmakers, or otherwise in the business. The general public is generally not invited, you see. But we had connections, and we made it work.

Here then, a piece I wrote about that trip, including an epic French meal involving an avalanche of flatware.

Sixteen Forks and a Milkmaid

We’re three hours into our meal at the very elegant Lou Marques in Arles, sitting at starched white-cloth tables surrounded by cutlery. Not the same cutlery we started with back at the dim beginning of dinner. No, we sigh, thinking of the poor dishwasher and the endless stream of forks. Used or not, they leave the table only to return in quantity.

We aren’t complaining. We’re in France, eating a luscious meal at a leisurely pace, the way God and the French intended. We sit by the open door where a light breeze cools our backs. (Instead of the hot table by the kitchen where they tried to stick us. Heh, we Americans have seen that trick.) The waiters do English pretty well, we’ve found, but don’t try the ancillary help. What do they call bus boys in French? What do they call the buxom lass who pushes around the cart of fromage? With her blond braid and extra-large dirndl skirt at first we think of her as Alsatian. We can see her thick arms pounding a pie crust for quiche. Then it comes to us — my two friends and my son (trapped on his graduation trip with three middle-aged, shopping-crazed women just because he wants to see the Cannes Film Festival). She is Swiss — a milk maid! Something about her damp face and the way she pulls her white blouse away from her bust as she stops at each table. Fromage, monsieur? Then she pops the damp fabric away so we won’t stare at her lacy brassiere underneath.

She works hard. The waiters glide here and there, taking orders, pouring wine, delivering steaming plates of lamb or bowls of bouillabaisse. In their black suits they look serene despite the heat. The milkmaid does not look serene as she cuts me samples of fromage, or switches the silverware for new silverware, or sweeps the cloth with a crumb squeegee, or takes away plates. She looks like she might lose a pound or two tonight if she doesn’t sneak some fromage.

We’ve just arrived in this old city with its Roman relics. Across the street the city’s wall stands from two-thousand years ago, and a block away parts of the old theater remain, still ringing with classical poetry. The amphitheater built by Romans in 90 AD, where in the Middle Ages the entire village retreated for safety, has been resurrected and again is the scene of festival and pageantry during the town’s bullfights.

We miss the feria, the bullfights; they are in Nîmes this weekend. Despite the promise of tight-fitting velvet and the swish of the horns, we decline, instead taking a day-trip to Tarasçon where we fall in love with a beautiful old castle on the Rhône. My son wants to make it into a disco and upscale restaurant, perhaps live in a turret. Solid and well-preserved, the castle was built by one of France’s Renaissance-era kings with a passion for barge travel. The doors to the river would open, the barges float in for unloading. The top of the castle is classic, gargoyle waterspouts and a vertigo drop to the water. Sadly, my son admits a nightclub in the middle of sleepy, beautiful Provence is unlikely to make a go. The cannon ball dents, giant pock marks, in the castle walls tell a thousand tales.

Back in the Lou Marques, we tell tales and wait for dessert. New forks arrive. We wave at a few waiters who wave back. The milkmaid delivers fromage to other tables. Our travel mantra, spoken with a lisp courtesy of the movie,”Ladies’ Man,” haunts us: “We gotta get the he’ outta he’.”

Our sightseeing day was warm, very warm. But we trudged on to the Pont du Gard. It’s bank holiday and the campgrounds are full. Daytrippers stream to the river, to jump into the lazy waters or to climb to the top of the bridge, an aqueduct built again by Romans, three levels of arches spanning the canyon. At the top we wonder where the water came from, it is so dry and rocky. Where did it go? We buy a brochure, find there were more magnificent bridges, just to bring spring water to a small town. Another Roman work project. A we-can-do-it-and-we’ve-got-the-slaves moment in history.

Water would be nice as we wait for dessert but all the help is elsewhere, running around the dining room. The milkmaid is miles away, across the cavernous room with its twelve-foot curtains. Being Americans we didn’t wait until nine to go to dinner like the sensible French. So now everyone else is in the middle of dinner while we linger, sated by fabulous food but fading. My son goes to bed. It is ten-thirty.

My friends are in search of gypsy music. They both are in a drum group and are Gypsy Kings fans. We’ve heard of one place in Arles but they only have music on weekends. The concierge looks at us suspiciously when we ask. Last weekend we were in Cannes with the beautiful people. We dressed, we walked the red carpet, we saw incredibly depressing movies. Through the good graces of well-connected friends, we got hard-to-obtain tickets for a working class English drama. Mutterings during the show: “Chemicals. Get these people chemicals.” Up in the nosebleed section, people are leaving in droves. It’s a good movie, raw and honest, and the cast and director are there. We applaud, hoping they will mount the stage and tell us it’s all fiction. They decline.

One night at the Festival du Film seems enough. We’d like to see more movies but next time we have to get press passes so we can indulge all day long. We can’t eat at the café on the Hotel Majestic’s beach. Private Party. We can’t get into the hall. No badges. Security stops us at the Hotel’s drive. We open our bags for inspection but they don’t like our looks and our Cannes mantra ‘we don’t have badges’. We foil them on show night by taking a taxi right up to the door. We walk out of Depressing Movie and music is playing outside between screenings, “The Girl from Ipanema.” Happy to be released from British angst, I sing a few bars, someone behind me sings the rest of the verse. I turn. It’s Sting, with Trudy on his arm. I punch my friends in the back. I have sung with Sting. My trip is made.

Our friend surprises us the next day, delivering more tickets and official press packets. (But alas, no badges.) 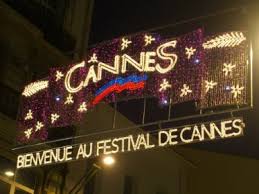 We have been daytripping but there is just enough time to mend my broken dress strap and go. My son looks fabulous in his new Italian suit. The night before a gorgeous young blonde insisted he buy a bow-tie at the Festival entrance (no long ties!) He gets to use it again, slashing its per-use cost to seven-and-half euros. We see a more uplifting music-themed movie, also English. People still leave in droves. Do reviewers really watch the whole movie? Who are these people anyway? Taxis are non-existent. We traipse the length of the Rue Croisette looking for one. A friendly doorman at the Hotel Martinez takes pity after I adjust my neckline. While waiting we see a mini-van pull up. Young women, bodyguards, and a slight young man with a sprout of chin hair and a pulled-down ball cap pile out. The bodyguards push away autograph hounds. Could it be Leonardo DeCaprio? We see him in the paper the next day with Cameron and Scorcese. We decide to stick to the story. We saw Leo. We didn’t sing with him but we saw his back. Sorta.

At the Lou Marques dessert finally arrives and is worth waiting for, chocolate and homemade sorbet and creme brulée. The bill could have waited. We are charged for four bouillabaisse dinners instead of two appetizers. Negotiations are lengthy. We embarrass ourselves, stumbling through our tired high-school French, but prevail. We stumble through the old convent’s cloisters to our yellow paisley room, exhausted.

Stay tuned for my new novel set in France: The Girl in the Empty Dress, the sequel to my bestselling novel, Blackbird Fly. Coming in May.